What comes to mind when you think of 90’s video gaming? More specifically the 32-bit era of video gaming in the mid to late 90’s? One gem stands out as a diamond in a field of diamonds (there were heaps of truly epic games on the 32-bit platform) but one stands above the rest. That game is ‘Metal Gear Solid’ released by Konami for the Sony Playstation in 1998. It is a single player stealth action game with a top down camera style. 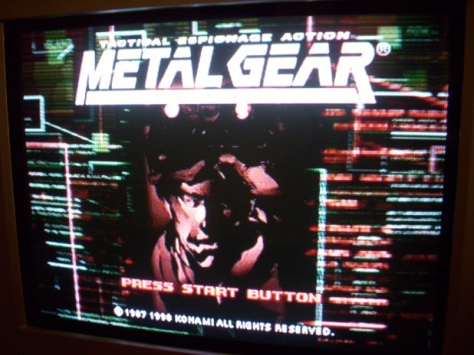 You play the role of an elite soldier ‘Solid Snake’ who must infiltrate a nuclear weapons disposal base called ‘Shadow Moses’ in the cold Alaska wilderness. The game takes place somewhere between Febuary 21st and 27th 2005, 6 years after the events of Metal Gear 2: Solid Snake (released on the NES – not to be confused with Metal Gear Solid 2 on the PS2).

A genetically enhanced, renegade special forces unit, FOXHOUND, leads an armed uprising on a remote island in Alaska’s Fox Archipelago. This island, codenamed “Shadow Moses”, is the site of a nuclear weapons disposal facility. The forces that seized this island, led by a mercenary known as Liquid Snake, have acquired the nuclear-capable mecha, Metal Gear REX, and are threatening the U.S government with a nuclear reprisal if they do not receive the remains of the “legendary mercenary” Big Boss within 24 hours. – Source: wikipedia.com

Back when the game released almost 15 years ago it scored many 90%-100% review ratings and it is easy to see why. To give you an idea of the story and game itself, check out one of the best intro’s to a video game ever:

The game still holds up very well by today’s standards, sure the graphics do seem a little dated but the storytelling and gameplay is 2nd to none. The sounds of the codec ringing in your ear, or the clicking through your inventory with the left and right shoulder buttons is hard to forget. If you’ve played through the newer Metal Gear Solid releases you’ll be used to being able to aim your weapons using a first-person view style that is sorely missing from the original on the PSX but apart from that its hard to fault this game. The boss battles you have are challenging, the sound effects and music are simply amazing (some of the best music composed for a game – thanks Harry Greggson Williams!) and the connection you build with the characters in the game leave you wanting more well after the final metal gear Rex battle at the end of the game.

One of the highlights of this game for me was the battle and connections you build with the ‘Sniper Wolf’ character. She is an elite Russian sniper who has a deep connection with her surroundings and her wolves. When you hear the howling of wolves in the distance, you know you’re close.

If you are a fan of action games or gaming in general you really need to pick up a copy and play this game.