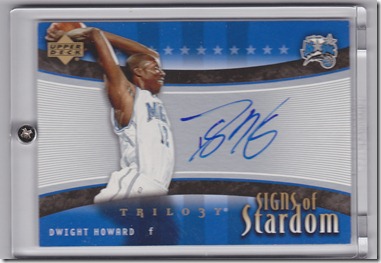 If you are unsure what an autograph buyback card actually is, basically it’s a card that was originally released unsigned in a previous product, re-purchased by the card company and autographed by the player. Buybacks are usually very limited and in this case, the original card was #’d to 125 but out of those 125 only 13 are actually autographed as above so that’s pretty cool.

To give a bit of an update on the 94-95 Skybox emotion set chase, no movement yet. Still not been able to track down any more cards but I’m chasing up on a few leads at the moment. Expect some more news mid next week.