If you’re ever on twitter and want to follow me to see what I’ve been up to, or what I’m doing you can add me: http://twitter.com/judstin

If you’re not on twitter but are still curious to see what I’ve been up to, you can just stop by here on my blog. My Twitter updates are displayed to the right of the page just below the site’s most popular posts. 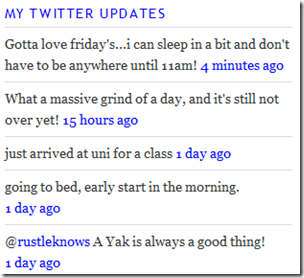 Twitter differs from other social networking sites like Facebook and MySpace by its simplicity in finding what people are doing, and following others you may be interested in without having to wait for friend requests, etc. Twitter doesn’t use the ‘friends’ concept, but you can search for anybody you like (even celebrities) and just “follow” their tweets to see what they’ve been up to.

For example, I’m following Jimmy Fallon. He likes to update his followers on what’s coming up on his show and stuff he finds during the day that interests him, I follow Heidi Montag (from the Hills) and she updates her followers on what’s happened on the set of her show, etc.

Interesting new concept, so I thought I’d get on that bandwagon.