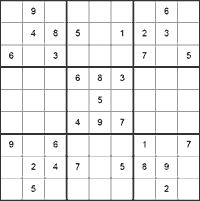 The Sudoku craze just seems to be getting bigger and bigger. Everyday I’m sitting on the train to and from classes at uni and I’m always seeing people working on Sudoku puzzles in newspapers, puzzle books, magazines, etc. Now you can scrap the boring paper based game and get your hands on Zendoku for the Nintendo DS.

Zendoku is essentially a classic Sudoku game, but with a huge action-packed twist.

“In Zendoku, players must use the controls to attack or defend against a challenger, or race against the clock, while completing one of the game’s puzzle permutations.” source: ign.com – Zendoku comes to PSP and DS

Publisher Eidos Interactive (Hitman, Tomb Raider series’) and developer Zoonami Ltd have announced that the game will be scheduled to launch on the Sony PSP and Nintendo DS/lite handheld consoles with a sole focus on fun and innovation. The game idea reminds me a lot of Tetris DS’ Mission mode where you race against your slowly depleting health meter to complete as many missions as possible.

This game really sounds like a lot of fun, taking a classic pen and paper game to a whole new level adding an action element to the game to not only challenge your brain, but also your attacking skill also.

This game sounds really interesting and will be excited to see what the final product looks like and how it plays.

Release Date: No official release date for Zendoku has been announced. (estimate: Q2 2007)

5 thoughts on “Zendoku on the Nintendo DS / PSP”