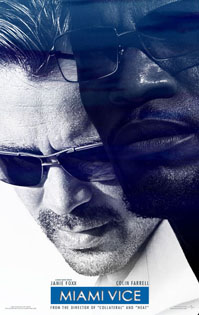 The beloved television series of the 80’s Miami Vice is back with a film adaptation of the series. Michael Mann who is the director of the film was also one of the original show’s producers which is just great. Mann has had alot of experience with the franchise and who better to bring Sonny and Tubbs to the big screen than he.

I’m not going to pull all the crap on the net about the film away and whack it up on here, but you can check out a really great film synopsis at RopeOfSilicon.com.

If you were a fan of Michael Mann’s previous film Collateral starring Tom Cruise & Jaime Foxx, then I have no doubt you’ll abosolutely love Miami Vice which is due to open in Cinemas July 27 (Australia), July 28th (North America). Both these two films have fairly similar cinematography and visual effects and is really worth a look.

I so cannot wait until this movie hits theaters. I was a pretty big fan of the tv show and can’t wait to see Sonny Crockett and Ricardo Tubs back for some more action.