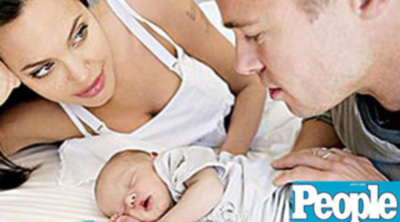 Over the last year or two, we have seen a huge increase in the number of celebrity couples exchanging vowes and starting a family.

It is a well known fact that many celebrity couples have a history of naming their children 'interesting' names to be as polite as possible about it. These kids who are/will be celebrities in their own right thanks to their parents definately will have that 'killer' stand out name which seems to be forever more important in Hollywood these days.

There can be no mistaking a name like Apple or Shiloh in the classroom thats for sure. At least when these kids start attending school, they will definately know when the teacher is talking to them.

In case you are totally oblivious to what i'm talking about and have been living under a rock for the past few years, here's a list of many celebrity couples and their children's names:

What would we do in a world without celebrity babies. People are always trying to come up with new baby names, instead of professionals who know what they're doing coming up with new names, we should all just leave it up to whoever seems to be popular in Hollywood at that particular time.

Celebrity babies are a huge hit once they enter the world, but a few weeks after the birth and everything settles down, people start to forget about them and they just get on with their lives. I myself don't really see what's so fascinating with celebrities in general. You always see people on the subway or in a shopping center reading gossip magazines. Is your life really that boring? I doubt it.

Lots of people will tell you "oh my life is so boring, i just like reading them to see how life works for a celebrity". I can understand where your coming from, but its like everything when it comes to celebrities and the nature of being famous. If you're famous and well known, it takes work to remain famous and well known for quite a while. Many entertainers usually have a peak in their careers where they are the most popular, then their popularity dies down and in many cases, fades away completely.

It is this nature of celebrity and being famous that the children of these parents will have to grow up with, and that must be so hard on them sometimes. I'm not trying to bad mouth anybody here, but If my name was Apple for example, just becuase my parents were famous, doesn't mean that teasing and bullying in school won't happen.

While celebrity babies are all the news for that first few months, things die down just like the popularity of their parents in some cases and people just move on. A name can mean so much to a person, it is their identity after all.

2 thoughts on “The rave of the celebrity baby”